I find myself strangely fascinated by the recent trend of Achievements in games. For the uninitiated, achievements are a sort of titles that you get when you have done a particular thing in a videogame for the first time (like collect the Six Sacred Stones or run very fast into a wall, etc). So you don’t get a power-up or gold or points or extra lives or anything that influences the gameplay at all. Only the title. The reason for my fascination is that it seems like achievements can turn anything into a game!

We’re playing a bit with the concept in the design of The Path, and, depending on how we end up publishing the game, we might add more. Achievements are a very simple mechanic. They require hardly any design, are easy to implement and instantly provide the player with motivation and goals. These two, of course, being the Big Problem that needs to be solved in order to allow videogames to evolve from the toy-like things that they are today into the full-blown mature medium that we all know they can become. 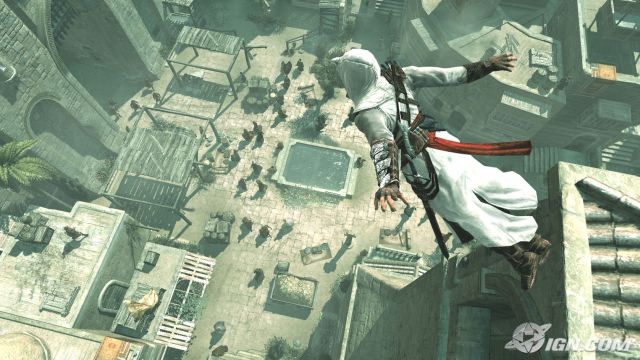 Assassin’s Creed, at least the way I play it, seems to be largely structured around the concept of Achievements. It offers you a fully explorable living world which is a joy to simply walk around in. But, typically, as such, it runs the risk of becoming too ambient to keep the player motivated. Setting your own goals and having the discipline and patience to explore is not an easy thing to continue doing for the many hours that games like these take. But just before you get in trouble, you almost accidentally collect a flag. And the game tells you that it’s flag number 1 out of a hundred. Or you climb a large tower to enjoy the view and the game tells you there’s nine of these. Instant motivation. Simple.
There’s more to Assassin’s Creed than this. It includes the traditional missions and combat and narrative progress. But I find these far less interesting.

Achievements can turn everything into a game. At least everything that is interactive.
I’ve tried to imagine a way to add achievements to reading a novel or listening to music but I couldn’t get there. Which doesn’t mean that it’s impossible. Suggestions are welcome in the comments!
The absolutely wonderful thing about Achievements to me is that they don’t interfere with the narrative experience much. They are extremely lightweight in terms of meaning. So now we can concentrate on making our interaction design express the story rather than forcing the rigid challenge-effort-reward game structure to do so, or -possibly worse- forcing the narrative to comply with the demands of such a structure. Achievements offer designers an opportunity to finally start exploring the non-linear nature of the medium without losing the players.

33 thoughts on “Achievements will save us all!”