Tale of Tales presents! the first in a series of interviews with game authors and theorists: an interview with American McGee, author of the wildly succesful American McGee’s Alice and the violently criticized Bad Day LA. About fairy tales and sacrifice, narrative and art, digital distribution and his newest project “American McGee’s Grimm”.

Soon, we will start publishing a new series of interviews with designers and theorists about games. Focussing on aspects that we feel are often neglected: storytelling, new forms of interaction, realtime aesthetics, different audiences, etc. The idea is to break out of the typical narrow cycle that blog discussions often end up in and listen to what other people have to say about these things. We’ve already started these interviews and I can tell you there’s a lot of Good Stuff coming up!

The first in the series is an interview with American McGee about fairy tales, sacrifice and art.

Next we will be talking to Celia Pearce, Alex Mayhew and Maaike Lauwaert.

So watch this space!

If you have any suggestions of people we should interview, please leave a comment.

Everybody gets carried away with the technology. When the technology gets more usable… Then the story tellers get more to the forefront. My hope is, but I can’t tell you when it will be, that we reach the peak in perfection so that the consumer doesn’t see the difference in technology anymore – then it is a pure race for entertainment.

Indeed. I can’t wait for the arms race to be over. But Mr. Florin is smart to not put a date on this. The truth is that, despite the glossy pictures from the next gen consoles, the technology is actually still quite crude. In fact, it is still so primitive that it takes entire teams of engineers to make the hardware respond in an acceptable fashion. The technology needs to become excessively powerful so that everyone can experiment with it without the risk of bringing performance to a crawl or crashing the machines. We’re still a long way from that level.

And when we achieve such extreme hardware performance, we can finally start working properly on solving the real problems of interactive entertainment. I agree with Mr. Florin that things will get interesting then. But just making way for “the story tellers” is not enough. They need to learn how to work with this technology, how to tell stories in interactive media, how to make things look and feel and sound the way we want. There’s a lot of work to be done. I can’t wait for the builders to leave the kitchen, so we can finally start cooking! 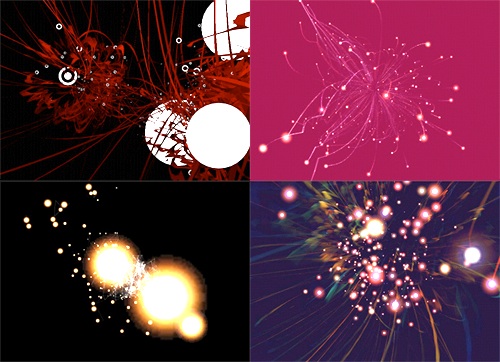 Magnetosphere is a plug-in visualizer for iTunes. It’s pretty wonderful actually. i would even call it mesmerizing. You can get it for free at barbarian software

On flight404, Robert Hogin’s blog, he talks about the mechanics, inspirations and shows some more wicked imagery.

He tells me that this is what a mode in verison 2.0 of the plug-in will look like.
Well, we all hope so

I get so tired of that.

Games have been around for thousands of years. I don’t see why we need to discuss them anymore. They are a known fact, a well-documented craft, a historical art form, etcetera. Everything there is to be known about games, is already known.

It seems to me that there’s actually very little books about games that were written before computers. There’s Huizinga, and there’s Callois. And probably one or two hippies. And that’s it. For an age-old artform that strikes me as very little.
But since computers, we’ve seen an explosion of books, guides and documentation. Is there perhaps something about computer games that is not covered by the age-old game-wisdom? Something that does need to be discussed?

There is something about computer games that makes them infinitely more compelling than traditional games. At least for a part of the population. It is not the gameplay. Because gameplay can be found in many non-computer games, in much purer forms. Only a small fragment of the group of computer gamers also plays chess or board games. And very few of them play those with the same dedication as computer games.

So please. Stop nagging about goals and rules and missions and levels. They are clearly completely besides the point!

It’s quite vital. We know next to nothing about those things. We don’t even know what they are.